Jim is a character who first appeared in the 2020 video The First Guy To Ever Get Ripped, and is played by Ryan George. About halfway through the video, the main character Bodybuilder Guy reveals Jim's name. It is phrased in such a way that suggests gyms are named after Jim, who is building the first room of such kind. Every time Jim appears in the video, he is holding a large hammer with a wooden handle and a dark iron head. Until the fourth wall shatters, Jim exclusively looks at his hammer with large interest, and turns it as if to look at it from different angles. One might therefore assume that this is Jim's first time building a room, which also explains why the fourth wall shatters very easily.

"Yep, just finished putting up the third wall. Now I'm onto number four." - hints at a fourth wall joke later on in the video.

"I don't know, I'll think of something." - Jim's response to Bodybuilder Guy asking what they should name the heavy lifting room.

"Oooh, my god!" - Jim's response to the 4th wall shattering.

"I don't know, but the 4th wall just shattered!" - Jim's response to Bodybuilder Guy asking him what happened. 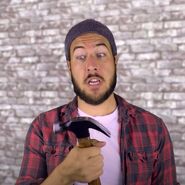 Jim looking at his hammer

Community content is available under CC-BY-SA unless otherwise noted.
Advertisement